My oldest daughter, Naama, is a sweet and sensitive little girl. She stood up in front of camera crews and news reporters and did an excellent job at expressing her thoughts to the world.

Naama, who usually shies away from people she doesn’t know, participated in many interviews, took lots of pictures, and shared her thoughts because she knew that by telling the world of the extremists behavior, it may stop them from coming back.

I was getting ready for a vehicle convoy demonstration going towards the prime ministers office last week. Naama overheard a conversation I was having with a friend, and immediately asked me where I was going and what for. When I explained to her what a vehicle convoy is, and the reason we were demonstrating, she asked if she can draw a picture to hang in our car. 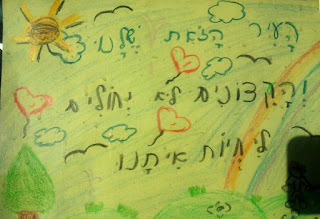 The translation of what she wrote was: “This city is ours, and the extremists cannot live here with us”.

I was so impressed because it said nothing against ultra-orthodox, non-orthodox, conservative, gentile, or any of the like. It focused only on those who are causing such an uproar in our city.

I really would like to think that the actions of my powerful little girl, might make a change. A change that our nation as a whole needs, to continue living alongside so many different people, with so many different ways of belief.

Goodbye, Bet Shemesh This post is for my friends who have been there for me prior to the events which took place… Continue Reading >>

Why I Started Blogging My name is Hadassa Margolese, I am the mother of eight-year-old Naama Margolese from Beit Shemesh. This blog… Continue Reading >>

This site uses Akismet to reduce spam. Learn how your comment data is processed.

I’m a mama of three, and spouse to one. Coffee addict, workaholic, love everything the color gray and have been quoted as a reluctant activist.

I’ve been working in Content Marketing & SEO since 2013, and have a passion for everything digital… Also? I’m one of those lucky people who loves what they do for a living.

Think outside the box!

We use cookies to improve your experience on our site, analyze site traffic and display ads to your interest. Closing this banner, clicking on links, browsing this website, or scrolling this page, means you agree to our terms.AcceptDecline
[cookies_revoke]